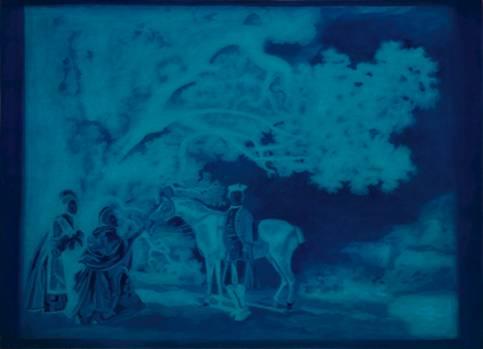 You are welcome to visit us at our BOOTH NUMBER G11

Paul Nugent’s works are influenced by photographic reproductions of eighteenth century paintings from art history books. Each painting painted in blue has the appearance of a print maker’s printing plate or of the early photographic process of cyanotypes. The photographic references are inverted through the painting process into negative images creating a kind of visual representation of the subconscious. This recalls Freud’s analysis of the photographic process of the negative plate being like the sub-conscious and the positive image the conscious.  Like images from a storybook they show figures in conversation or preoccupied in their own thoughts. The backdrops from which the figures emerge are painted in layers of transparent Prussian blue, transforming these woodland environments into graceful interior worlds. That which is opened to us for viewing has the character of a dream or memory evoking what the biologist and theorist Gerald Edelman called the remembered present, “as if perception and conscious flourish only in the hazy light of memory”. Paul Nugent’s work has always explored notions of history, symbolism, time, perception and memory.